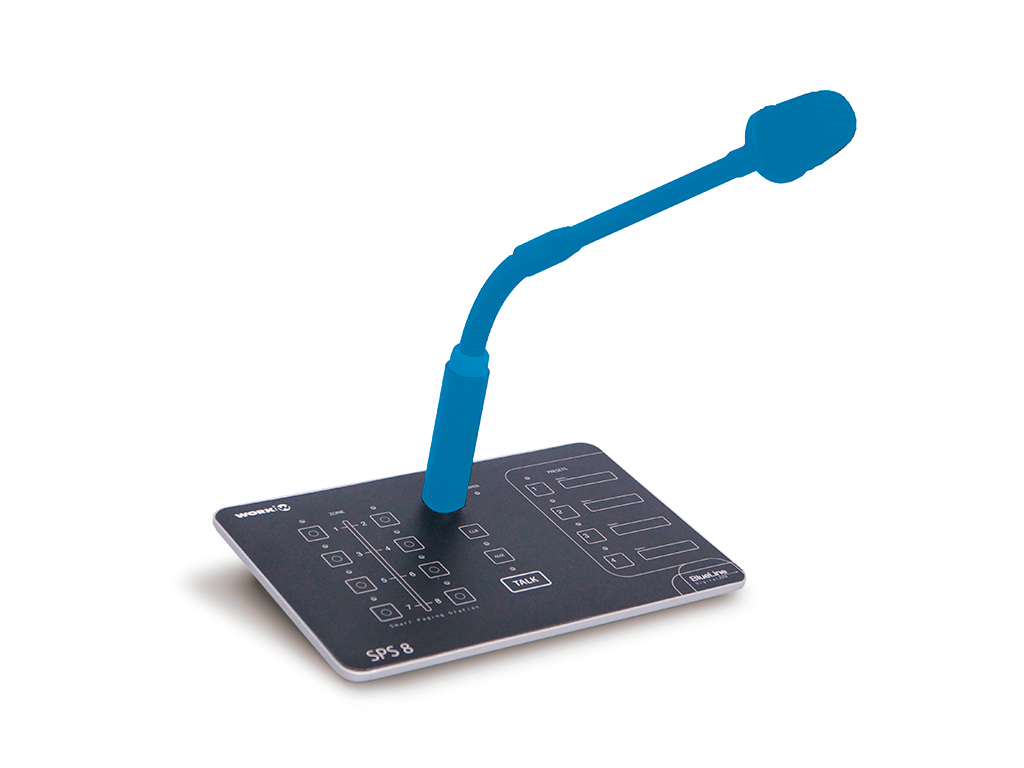 AoIP paging station microphone base 8 zones (up to 32 zones).

The new SPS 8 (Smart Paging Station) is the result of the evolution of the BlueLine Digital associated hardware, creating a PoE device capable of paging within a multizone environment, in addition to providing other functionalities.

Within these functionalities we should highlight the possibility that the SPS 8 also acts as an audio streamer. In this working mode the device is able to transmit to the network the audio source connected to its auxiliary input, in addition to continuing to perform paging when the user requires it. Therefore, in this working mode (AUX mode) the SPS 8 is able to adopt a double functionality: paging microphone and audio streamer, being an excellent solution for those scenarios that do not imply a high complexity.

On the other hand, the SPS 8 is not only an audio paging and streamer microphone, but it is also an alarm manager since it has a GPI that can be programmed for this purpuse, being activated when the contact is closed.

Finally, it should be mentioned that the SPS 8 is a completely programmable device, so that it can also serve as a control station. In this way we can have access to the multiple devices that we have included in our installation and which accept control by OSC, such as the rest of the BlueLine series devices and the LightMouse series devices.

In conclusion, the new Smart Paging Station SPS 8 is a device that allows:

- Send messages through the microphone to those areas previously selected through its keypad (paging).

- Act as audio streamer and paging microphone in environments that do not require a multizonal distribution (AUX mode).

- Act as alarm manager through the built-in GPI.

- Act as controller for the BlueLine and LightMouse devices, through its programming through OSC commands.